Japanese anemones are valuable plants for late summer and autumn. Its blooms bring wonderful, soft colours to the garden. They are easy, dependable and don’t need staking.

Great choice for lightening up a partially, shady corner of the garden.

‘Wild Swan’ has beautiful, white flowers with a blue reverse. It prefers dappled shade. Anemone ‘Wild Swan’ has a long flowering season from May to October. Expect a height of 40-50cm.

Where to plant Japanese anemones

They grow best in partial shade or full sun, in humus-rich, moist but reasonably well-drained soil. Japanese anemones are long-lived perennials. So they come back every year.

How and when to divide Japanese anemones. The best time to divide these plants is in early spring. Dig up a large clump. Divide the clump into two or three pieces.

Replant divisions and water thoroughly. If you replant the divided pieces in the same spot, improve the soil with compost or leaf mould.

Japanese anemones will look great with a range of partners such as  Agastache, Aconitum , Stonecrop, Ornamental grasses and Geraniums. 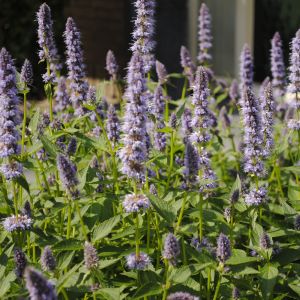