Aucuba japonica, also known as Japanese Laurel, is a lovely, evergreen, undemanding shrub. It copes well with shady growing conditions but will also thrive in partial shade or full sun.

Only female plants produce red berries if a male plant is planted nearby.

Aucuba japonica ‘Variegata’ bears glossy leaves, topped with striking, yellow speckles. Perfect for lightening up a shady corner of the garden. It reaches a height and a spread of 3m.

If you are short of space try Aucuba japonica ‘Rozannie’. This small variety has lance-shaped, dark green leaves and is self-fertile. So it will bear red fruit without a male partner. Attains a height of 1,5m and a spread of 1m.

Pruning Aucuba japonica ( Japanese laurel). Remove any branches that spoil the shape of the shrub in March. Also, cut out plain shoots on variegated varieties. Postpone pruning if the weather is frosty.

Severe pruning. If your Aucuba japonica gets too big, you can  renovated it by drastic pruning. The best time to heavy pruning is spring after the frost danger has passed.

Cut back branches to 50cm above ground level. Feed the shrub after drastic pruning or apply a mulch of garden compost around the base of the plant. 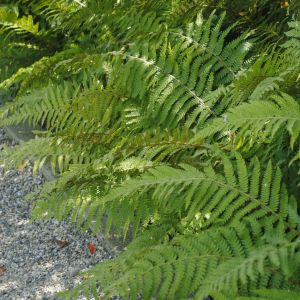