How to propagate mint from cuttings. Follow the instructions step-by-step. 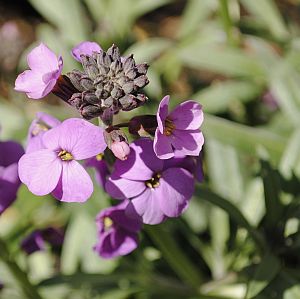 Erysimum ‘Bowles Mauve’, commonly known as wallflower, is indispensable for its long flowering season. Pale, mauve flowers appear on erect spikes from March to October. Its attractive lance-shaped, grey-green leaves look good all year round. Erysimum ‘Bowles is a short-lived plant and will usually need replacing after 2-3 years.

Pruning Erysimum ‘Bowles Mauve’ (wallflower). The plant flowers almost all year-round. So may be tricky to prune it. Can be pruned back in October. Best to cut off the top growth, but no more than 5cm.

May suffer foliage damage in cold winters. Protect the plant against frost with a couple of layers of garden fleece.