Ilex aquifolium, commonly known as holly, is a useful shrub that will add interest to the garden all year round. This shrub or tree has usually spiny leaves with white flowers in early spring which are highly attractive to bees.

The berries appear on female plants in late autumn if a male holly is sited nearby. Holly plants prefer full sun or partial shade and grow best in well-drained, humus-rich soil.

Ilex aquifolium ‘J.C. van Tol’. This variety has attractive, glossy dark green, almost spineless leaves. It is also self-fertile, so doesn’t need a male holly to produce berries. Lots of large, bright red berries appear in autumn and will stay on the tree through the winter.

Ilex aquifolium ‘Alaska’ is slightly different with sharp, spiny, dark green leaves. It is female-pollinating variety but will bear more berries if a male holly is sited nearby. Ideal for planting as a hedge.

And then there is Ilex aquifolium ‘Argentea Marginata’ (female). It has striking, spiny leaves with a creamy margin. Perfect for lightening up a shady corner of the garden.

Another to try is Ilex x meserveae ‘Blue Maid’ (blue holly), a tall shrub but with dark-purplish green stems and blue-green foliage. Best planted next to ‘Blue Prince’ to produce berries. ‘Blue Maid’ is also available as standard holly tree.

When should holly be pruned. Ilex aquifolium (holly) and Ilex x meserveae (blue holly). These shrubs need little pruning. Remove dead or diseased branches in spring or branches that spoil the shape of the shrub.

When and how to prune holly hedge. Trim holly hedge in late summer (around August) to maintain their form. Avoid cutting the leaves. If you cut through the leaves, the edges will often go brown. Best to use a pair of secateurs.

When and how to prune standard holly tree. Cut back new growth to keep the shrub to the desired size. Do this job in summer. 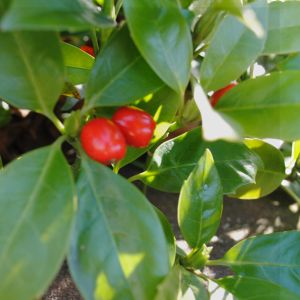