Crab apple. This attractive ornamental tree has a lot to offer. Masses of lovely cup-shaped flowers appear in early spring. From late summer topped with clusters of small crab apples which can be yellow, red, orange, or purple.

Malus x robusta ‘Red Sentinel’ is popular for its lovely white blossom, which appears in April-May, followed by cherry-like, bright red fruit, maturing to deep red. The crab apples of ‘Red Sentinel’ will persist for much of the winter.

Malus ‘Golden Hornet’ is much-loved for its golden-yellow crab apples. The dark green leaves take on a butter-yellow colour in autumn.

Those who want orange-yellow fruit try Malus ‘Evereste’. This variety can grow up to 5-7m tall.

Crap apple looks fabulous on its own or combined with other plants such as Catalpa bignonioides ‘Nana‘ Magnolia, Syringa, Choisya ternata. 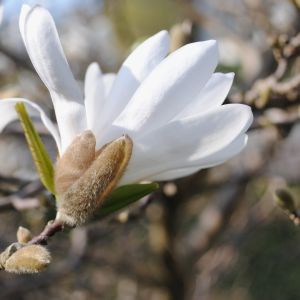