Nandina domestica, also known as heavenly bamboo, is a good choice for a small garden as it grows relatively slowly and remains fairly compact.

Nandina domestica ‘Fire Power’ has an upright habit with foliage that turns fiery copper-red in autumn. It will eventually grow to 0,7m tall.

Similar in size is Nandina domestica ‘Gulfstream’. In late autumn the leaves take on a beautiful orange-red colour.

Pruning Nandina domestica ( heavenly bamboo). This shrub requires little pruning. If necessary, cut back any shoots in April that spoil the shape of the shrub.

If Nandina domestica has grown quite large, or if the shrub has become bare at the bottom you can renovate it by heavy pruning. Cut back one or two of the oldest stems just above the base of the plant in April.

Nandina domestica  can withstand – 10 degrees Celsius. Needs protection in cold areas. Cover the base of the plant with a thick layer of dry mulch to reduce frost penetration. 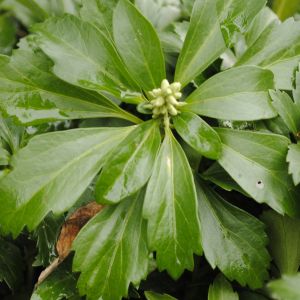