Rhododendrons are  highly valued for its large, showy flowers in spring. They are available in a range of heights and with flowers ranging from pink, red, violet, lilac and white.

Rhododendron ‘Nova Zembla’ is grown for its abundant clusters of red, trumpet-shaped flowers which appear in May. It has also attractive, dark evergreen foliage. Expect a height and a spread of 2-3m.

If you are short of space try low-growing dwarf rhododendrons. Good forms are the violet-flowering Rhododendron ‘Azurika’ and Rhododendron ‘Night Sky’ which has violet-blue flowers.

Both shrubs will eventually grow to 50-60cm tall.

Rhododendrons need little pruning. Remove dead or damaged stems after flowering. Cut them back to about 20cm above the ground, pruning to above a bud.

Deadhead if practicable. Next year’s buds are formed just below the spent flowers. Remove the faded blossom trusses with your fingers.

Create the right conditions.  Rhododendrons perform best when grown in humus-rich, acid soil. If necessary, add ericaceous compost to the soil before planting.

How to plant Rhododendrons in the ground. The roots of rhododendron grow very near the surface. So don’t plant too deeply. Dig a planting hole as deep as the root ball and twice as wide.

Rhododendron doesn’t like to dry out. Mulch will keep moisture in the soil. Apply a 5cm layer of garden compost or leaf mould around the base of the plant in March. 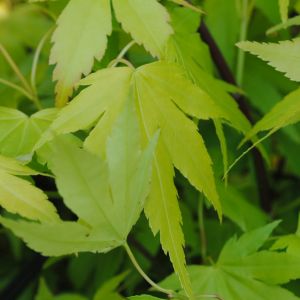