Viburnum tinus is a great shrub for bringing colour to the garden during the winter months when little else is in flower. This shrub produces a succession of pink buds opening to white flowers from late autumn until spring. After flowering dark blue-black berries will appear.

Flowers best in full sun, though partial shade is tolerated.

Viburnum tinus is a large shrub. So give it plenty of space. Expect a height of 4m and a spread of 3m.

Viburnus tinus ‘Eve Price’ and ‘Gwenllian’ are smaller in size and will grow to a height of 1,5-2,4m and bear clusters of white flowers, pink-tinged in bud.

When to prune Laurustinus or Viburnum tinus. The shrub flowers on the previous year’s growth. So prune after flowering in spring, cutting back shoots that spoil the shape of the shrub.

Feed the shrub after drastic pruning or apply a mulch of garden compost around the base of the plant.

Viburnum tinus standard can also be pruned when flowering has finished. Remove old flower heads and shorten vigorous shoots to maintain the appearance of the ball head.

Viburnum tinus is fully hardy but foliage can be damaged by severe frost. Protect the plant against frost with a couple of layers of garden fleece.

Holes in the leaves of Viburnum tinus. Most of the leaf damage is caused by the beige-coloured larvae of the Viburnum beetle. What can do you about it.

For companion plants consider early-flowering shrubs such as Amelanchier lamarckii, Hamamelis and perennials such as Helleborus. This plant often flowers simultaneously with the viburnum’s main flush. 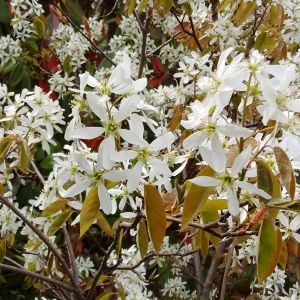